skip to main | skip to sidebar

On Mondays I post at CHICKS ROCK!, the blog of The Women's Mosaic. Check out my posts there, too!

On Mondays I post at CHICKS ROCK!, the blog of The Women's Mosaic. Check out my posts there, too!

Posted by Kekla Magoon at 10:43 AM No comments:

Okay, so it wasn't all that sunny in reality, but my recent visit to Northern California certainly left me with a nice sunny feeling inside.

I spent a week on the west coast, mostly in San Francisco with a few days spent up in Chico, California. Soon, I'll post about the actual work I did, which was the central purpose for my travels (four events during the course of the week!), but in between, I managed to find some time to just be a tourist. 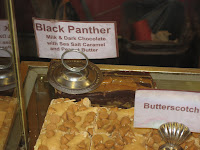 I did some research on the Black Panther Party while I was in the vicinity of the area where the group was founded, and it turns out the legacy is alive in a lot of different ways throughout the city. The tastiest homage I ran across was Black Panther fudge at Z Cioccolato. It's their best seller. Yum! 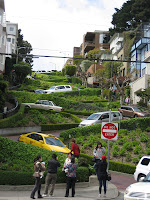 I rode the cable cars everywhere they went! I didn't really know how cable cars worked until I went to the Cable Car Museum, and boy, did I learn a lot about cables. However, the cable cars do not go down this road, the "crookedest" street. This cracked me up. I've never seen anything like it.
Sunset on the Golden Gate Bridge. Turns out, the 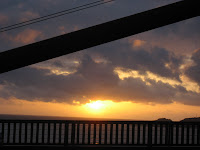 middle of the bridge (there's a pedestrian path) is as good a place as any to be inspired to scrawl an epic poem in your notebook, and stand there awkwardly, looking bizarre and gathering suspicious looks from passersby. Ah, the embarrasments we suffer to pursue creative arts.
Posted by Kekla Magoon at 6:00 AM 2 comments:

Email ThisBlogThis!Share to TwitterShare to FacebookShare to Pinterest
Labels: travel

Camo Girl on the Radio 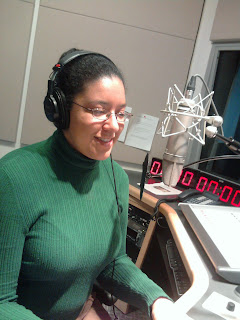 I was recently invited to speak on NPR's Michael Eric Dyson show, interviewed by (you guessed it) Michael Eric Dyson, bestselling author, educator and radio personality. It's always fun and exciting to be interviewed, but it's even more so to be interviewed by someone whose books have been in my collection probably since before I really started writing. When I learned about this opportunity, it was pretty awesome for me to realize that not only had I heard of Mr. Dyson, but I could point out several volumes of his work on my own bookshelves!

I recorded the interview earlier this week in NPR's Midtown studio here in New York. Mr. Dyson was speaking to me from the D.C. studio. Now, I know radio is a relatively old technology, but it's still neat to think about having half a conversation in one room, in one city, when the other half is happening with someone hundreds of miles away, and have the capability to air that conversation nationally at the same time! (This wasn't a live broadcast, but still....I'm easily impressed by and in awe of technology at all levels.)

My interview airs today in selected markets across the country, but unfortunately I don't think it airs in New York! The good news is, a podcast of the show is available at the Dyson Show website.

It's an hour long show; my interview segment begins at 23:00, and lasts just shy of nine minutes. Check it out!
Posted by Kekla Magoon at 10:00 AM 1 comment: 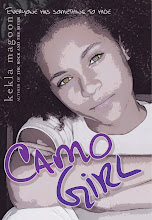 Present day, Nevada. Twelve-year-old Ella and her best friend Z are mocked by their classmates and considered the "weird" kids in their 6th grade class. When a new boy, Bailey comes to their school, he befriends Ella, giving her a chance to make new friends and join a more popular crowd. But to do so, she'd have to leave Z behind. Can she make the right choice? 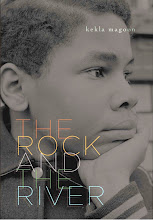 CHICAGO, 1968. For thirteen-year-old Sam, it's not easy being the son of a well-known civil rights activist. When he learns that his brother, Stick, has joined The Black Panthers, Sam faces a difficult decision. Will he follow his father, or his brother? His mind, or his heart? The rock, or the river?